Extending the limits of a pavilion

Performative project of which we can all participate thanks to the lack of complexity, the clarity of action, the simplicity of the gesture, the transparency of its intention.

Aimar Pérez Galí (Barcelona, 1982) works in the field of dance and the performing arts as a dancer, performer, creator, educator, researcher and writer. Trained at the School of Art of Amsterdam, he has worked in Holland for a few years and is now developing his career in Spain, where he has graduated from the Master of the Independent Study Program of the Museum of Contemporary Art in Barcelona. His work moves through research on the relationship between dance, movement, pedagogy and the development of new procedural approaches to the performing practice. His most recent works are Delta, A Post-Believe Manifesto, the performative conference Sudando el discurso and The Ping-Pong Dialogues. He has worked and collaborated with artists such as Xavier Le Roy, Nicole Beutler, Nora Heilmann, Andrea Boziç, David Zambrano, Abraham Hurtado / AADK and Silvia Sant Funk among others. He has been jury of the Visual Arts Award Miquel Casablancas 2013 and is co-founder and artistic director of Espacio Practico, a self-instituted space in the city center area of Barcelona since 2010. He is currently part of the group of artists ANTES.

Carme Torrent. She studied architecture at the University of Barcelona while working in various studies including that of the architect Enric Miralles. Meanwhile, she develops her work in the field of dance: showing her work, developing projects with other artists, being performer for other choreographers, including more strongly: Min Tanaka, Carmelo Salazar and Xavier Le Roy. Currently, a major part of her work explores the potential of places and contexts as choreographic devices. Generating situations that question the distinction between work and context. She is part of the group of artists ANTES. 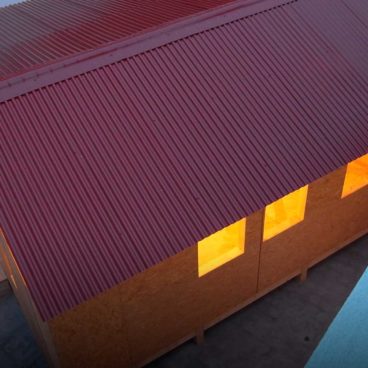 The Catalan Pavilion, Anonymous Architect takes the vacation home that Joaquim Anson designed and built for his family in the 70's.