On the occasion of the closing of the project La idea de una imagen [The Idea of an Image] de Martín Vitaliti (Buenos Aires, 1978) we invited the author to have a conversation with Rafael G. Bianchi, artist and professor of painting at the Faculty of Fine Arts of the University of Barcelona.

The idea of ​​an image is a specific work that occupies the entrance window of the Suñol Foundation. Part of the experience of encountering the painting of a reference, which Vitaliti himself was able to discover in the monographic exhibition that we dedicated to Joan Hernández Pijuan more than a decade ago. Based on the painting Gran espai daurat [Great golden space] (1976) by Joan Hernández Pijuan, Martín Vitaliti proposes new movements and speculations on the investigation that began in the 1970s by various currents of pictorial experimentation. An artist who takes over from those explorations, Martín Vitaliti’s work delves into languages ​​to subvert their particularities and widen their limits.

The conversation will be articulated, therefore, around fundamental concepts about painting, representation and visuality regimes. 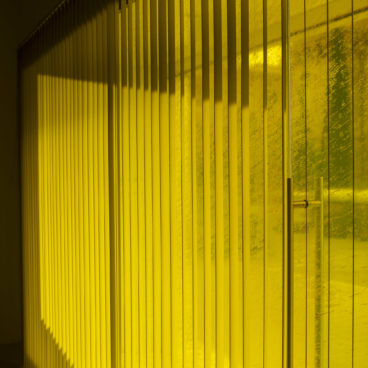 Martín Vitaliti - The idea of an image

Our first proposal for the On Glass cycle is the work of Martín Vitaliti (Buenos Aires, 1978), who presents a piece based on Joan Hernández Pijuan’s Gran espai daurat...